Cantate Domino of SG with Ernest Kwok in Aid of ERLC

The first day was held at Wesley Methodist Church to inspire students of ERLC. The theme of the musical was “Noah’s Ark”. The students felt fortunate to be able to enjoy such a beautiful rendition of song and drama.

On 18th June 2016 Cantate Domino did a fund raising event in aid of ElShaddai Refugee Learning Centre. It was held at the auditorium of Chinese Methodist Church, Klang.

The audience was totally awe-struck by the high standard of music and choir performance presented by the group whose members gave their very best. In the end they willingly donated no less that RM25,000  towards the needs of ERLC.

To God be the Glory, Great things He has done through the good work of his people.

Appreciation From the Heart!

Despite the many challenges faced by Accelerating Learning Programs (ALPs) students and their families during this pandemic, I am grateful for God’s blessing and provision in addressing their basic needs. Through the generosity and effort Read more… 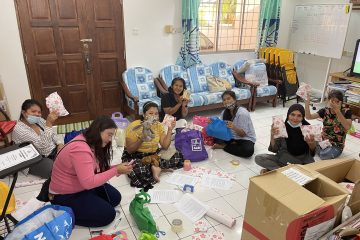 During the MCO period, many families of the Suluk and Bajau communities were affected. With the contribution from generous donors, ElShaddai Sabah has provided groceries, vouchers and medicine to the needy. After the long MCO Read more…

ElShaddai Centre has been continuing our support of families in need across the Klang Valley this year. we distributed shopping vouchers, cash, and provision with our Emergency Relief Fund. Lives IMPACTED – Contributed by Jenny Read more…