ElShaddai Refugee Learning Centre in Klang, Malaysia, received the most votes out of nearly 9,000 cast in our 2020 Hope Awards for Effective Compassion contest. El Shaddai will receive $10,000. Our other finalists—The Dream Center in Easley, S.C., Gilgal in Atlanta, Overflow Café in Maryland, and Refugee Hope Partners in Raleigh, N.C.—will gain $2,000 each.

ElShaddai—God Almighty—opened 12 years ago with 22 students. It now has 1,400 at its main center and several subcenters, a number reached by overcoming many obstacles. WORLD senior reporter Angela Lu Fulton visited ElShaddai and reported in our Sept. 26 issue that it is an openly Christian organization working with mainly Muslim refugees in a majority-Muslim country with strict laws against proselytizing. Students come from 20 different countries, including Myanmar, Indonesia, Pakistan, Somalia, Cambodia, and India.

Malaysia, a country of 33 million, has about 6-7 million foreign workers, at least half of whom are there illegally. Many have escaped conflicts or abject living conditions in their home countries. The migrants live on the margins of Malaysian society, taking on dirty, dangerous, and difficult jobs, and sacrificing so their children can have better lives. Although families are poor, they pay a small slice of tuition—about $16 per month for primary school and $28 for secondary—to give them a sense of ownership in their children’s education. Scholarships help those with many children and those who can’t afford even the small fees.

Some in the larger Muslim community are suspicious, but many Muslim refugee families send their children to ElShaddai. There they receive a quality education that includes, according to founder Andrew Ng, “a weekly character-building class in which Bible stories form the majority of the curriculum.” Students learn English, math, science, life skills (such as how to handle finances), and job training.

Teachers, some of whom were refugees themselves, relish the opportunity to show students God’s love and answer questions. One teacher, Daniel Ansumana Brima, spent 16 years at a refugee camp in Ghana: He spoke of his students who had lived through “the same terror” he had faced: “So when I came here, I felt I should impart the little knowledge I have to them as well.”

Marvin is editor in chief of WORLD and dean of World Journalism Institute. He joined WORLD in 1992 and has also been a university professor and provost. He has written more than 20 books, including Reforming Journalism. Marvin resides with his wife, Susan, in Austin, Texas. Follow him on Twitter @MarvinOlasky. 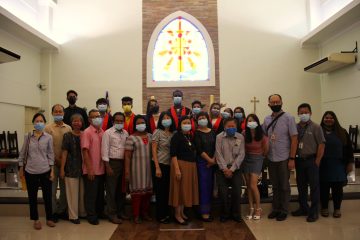 Four years after the ElShaddai education arm has launched the IGCSE syllabus in 2017, the pioneer batch of EXCEL students took their IGCSE exams in October 2020. We achieved 100% passes. All the students did Read more…

Introduction to ElShaddai Centre’s Shelters for Women and Children at Risk: A Collaboration with the UNHCR

In September 2020, the United Nations High Commissioner for Refugees (UNHCR) in Malaysia approached ElShaddai to collaborate on a shelter project for refugee women and children at risk. When this invitation was extended to us, Read more…

A New Journey in the midst of Trouble Times

A new milestone in the journey of developing our bakery social enterprise has been achieved when a new partnership, Le Moulin Sdn Bhd, was formed in August 2020, An established healthy food provider in Selangor, Read more…