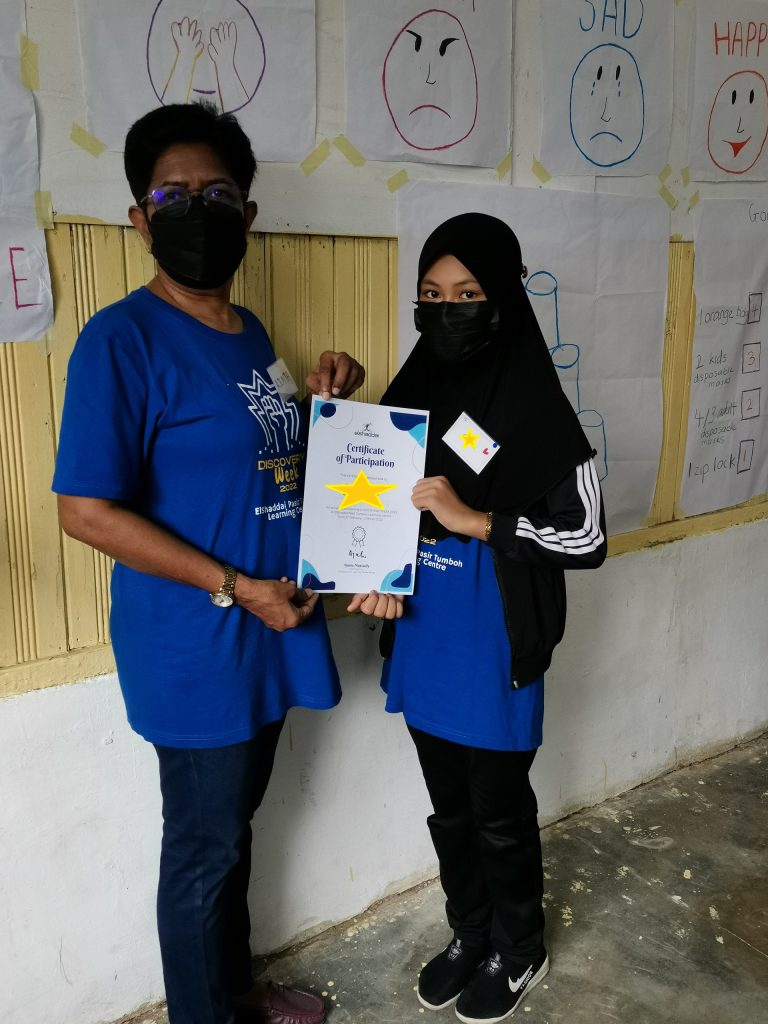 I joined Elshaddai Centre in January 2021. Prior to being with Elshaddai Centre, I was the principal of a local kindergarten, when I was also lecturing part-time at a college. When the Covid-19 pandemic hit the whole country, God opened a door for me in Elshaddai Centre.

In December 2019, a friend had invited me to be a guest story teller at one of the learning centres of Elshaddai Centre. At that instant, my heart was drawn to the children especially when I always have a deep desire to reach out to the less fortunate ones, particularly to teach them whilst they are growing up.

When I was then a principal at the kindergarten, I had started a class for those children who were having challenges in their studies. These classes were held on Saturday mornings for 2-3 hours within the kindergarten.

Teaching has always been my greatest passion.

Once, I was invited to attend the refugee students’ graduation ceremony. There, I saw these refugee students receiving their IGCSE certificates and was amazed that many of them had passed various subjects in flying colours. That was like a booster jab for me. I realized then as long as they were given the opportunity to study, they can excel.

There are several challenges during teaching in this pandemic time.

However, when school re-opened in November 2021, the class received full attendance. This showed the eagerness of the children to come back to school and they were super excited to learn.

Scholarship – parents are constantly asking for scholarships for their children. Many of them have other children who are also studying in the same school or other Elshaddai Learning Centres. Financially, it is difficult having to pay for 2-3 children who are studying at the same time.

Parents’ health issues – we have a case of two siblings who have been with us for 2 years. One of them is 11 years old and the other child is 10 years old. Recently, their father was admitted to the hospital and stayed there for about a month. Sadly, he passed away after that due to Leukemia. He was aged 47 years old. Their mother, aged 36 years old, was then still nursing a baby of one year plus. The mother works as a part-time house cleaner. Life is tough for them.

There is another case when his father passed away due to Covid 19, and then his mother discovered that she was in her second month of pregnancy. It was difficult for her to work. They needed financial help.

Another student’s mum has had liver problem and was admitted. She also needed to go for check-up often and most of the time, they would only go to the hospital when they are very sick.  Many times, it became too late then.

There is a misperception by the Malaysian masses that refugees are in secluded camps or that they live in remote areas which are usually far away. The fact is – they live amongst us and within our neighbourhoods.

Refugee children are hungry for knowledge and eager to learn. Recently, a mother wanted to enrol her three sons in our learning centres. The children are aged 12, 14 and 16 years. The handicap is – they do not speak or understand English, so it was difficult to put them in a higher-level class, known as A2, whilst A1 classes were full at that time.

When I told the boys’ mother, she broke down and cried and pleaded with me. The boys cried as well. I felt very sorry for them. The older boy then said to me: “saya boleh faham sikit cikgu”, meaning – “I can understand a little bit of English”. I can see their eagerness to study so in the end, we decided to open another class to cater for their needs.

There is a long list of potential students eagerly waiting to enter Elshaddai Learning Centre. However, due to a lack of space and teachers, we have been turning them away.

Recently, when the teachers informed the students that they are going to have a 3-weeks school holidays in March, they asked why the break is so long. They do not want the school holidays, but they would rather come to school every day.

Continuous Capacity-Building for All Teachers

Our in-house teacher trainer, Teacher Chan Bee Leng, has provided extensive training sessions throughout the year for teachers in Sabah, Kelantan and the Klang Valley. These sessions are available in both one-on-one and physical formats Read more…

Visit from the Ministry of Foreign Affairs

On August 20, 2022, we took the students to participate in an event held outside the centre in conjunction with World Play Day. ElShaddai Sabah carried out this event in collaboration with Malaysian Care and Read more…