“To be stripped of citizenship is to be stripped of worldliness; it is like returning to a wilderness as cavemen or savages…. they could live and die without leaving any traces”

Statelessness had received very little attention worldwide. Stateless people are “invisible” to most around them, yet the denial of citizenship impacts regions everywhere- causing a number of social issues such as forced migration, human trafficking and even armed conflicts.

So, what is statelessness?

The international legal definition of a stateless person is “a person who is not considered as a national by any State under the operation of its law”.

The millions of people around the world who are denied a nationality often are excluded from cradle to grave – being denied a legal identity when they are born, access to education, health care, marriage and job opportunities during their lifetime and even the dignity of an official burial and a death certificate when they die. Many passes on statelessness to their children, who then pass it on to the next generation.

The phenomena of statelessness in Malaysia is not new but it has been brought further to light for the public awareness due the influx of people in West Malaysia during end 2018 of 12,400 people as reported by UNHCR. This number consists mainly of Rohingya displaced from Myanmar.

The condition of statelessness in East Malaysia has been reported to be even worse and the actual number remains unknown due to the mixed migratory population in the indigenous regions. In the state of Sabah, stateless people has been “recognized” as a minority group and according to a 2021 statistics report, there are some 250,000 stateless youth, most of whom are of Filipino and Indonesian descent. Many stateless children begin work at an early age in places such as the fish market in the capital city of Kota Kinabalu.

There are several factors leading to the creation of stateless children in Malaysia – failure of marriage registration by their parents, unregistered births, adopted or abandoned children, and children of refugees and undocumented migrants.

In some cases, they live in Malaysia with their Malaysian father and non-Malaysian mother who had later married legally, while other cases for example involve them being cared for by Malaysians while the non-Malaysian biological mother had become untraceable.

A Lived Situation on the Ground

Out of over three million living in the state of Sabah now, it was estimated that almost one third are migrants who have travelled there over a span of some forty years. One of which is Sama.

Sama’s family lives on a traditional Bajau Laut houseboat off the coast of Sabah. This tribe of people are known as sea nomads, or even as sea gypsies. Sama does not know the calendar, there is no clock in his boat, which in fact is his home, and there is no electricity, no mobile phones. The main livelihood is fishing, an activity the family does from dawn to dusk.

As there is no record of any identity documents, Sama does not know his age and similarly, his children and grandchildren. Young children suffer the most as they cannot attend school. Being uneducated, they are often bullied when taking on menial jobs, with some of them even being trafficked and ended up in child prostitution. The more “fortunate” girls are usually married off by their parents to lessen their own loads.

Local government will organize raids periodically. Sama and his friends in the same predicament will have secret ways of passing such information from one to another and will quickly escape from the authority to hide in some secluded areas. This hiding can be for weeks and even months, and sadly, some will succumb to death due to hunger and dehydration. Those who are caught will end up in some detention centres which are usually over-crowded and very lacking in hygiene. Food is scarce and at the detention centres, it can be likened to “hell on earth” especially when the stay is an indefinite period of abusive hopelessness and a dehumanizing experience. There is just nowhere to deport these people to.

Some locals view these stateless people together with the refugees and immigrants with no apathy but rather, to a certain extent, hatred. It is felt that these people have “taken over” some of the jobs but the blame was mostly the “bad” influence and social ills these people are usually associated with or are blamed for.

The sad reality is – these stateless people have lived in Sabah for decades, from generation to generations.

Ever since its inception in 2008, ElShaddai Centre has assisted over 1,400 children from displaced and marginalized communities of various nationalities inclusive refugees, asylum-seekers, stateless people and other irregular migrant communities in Malaysia.

In the much thoughtful and detailed plan for 2022, ElShaddai Centre has committed to continuous efforts in the diaspora communities inclusive the statelessness. The focus is still in education with enhanced activities in skill training, even in computer related skill of drawing up Excel sheets.

In a world where God created all things to be bound together in dynamic relationships of differentiation, statelessness should not belong and conscientious efforts to eradicate this “category” of people must be stepped up.

When school reopened in January 2021, parents of diverse nationalities flocked to our centre to enroll their children. Ten months of the covid-19 pandemic had robbed these kids of a normal childhood, a normal school Read more… 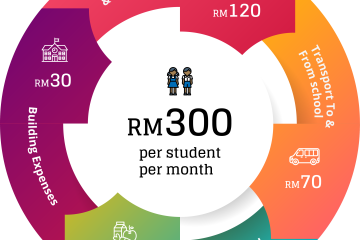 Sponsor a student, Change a future

There are some 45,650 children below the age of 18 who came to Malaysia due to displacement by conflict and natural disasters, and many of them are not able to attend school. You can change Read more…